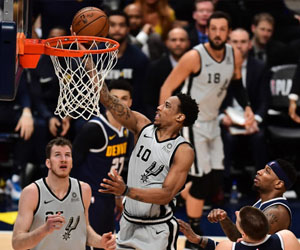 The NBA season is nearly a month old and already basketball bettors are seeing some significant patterns and trends, leading them to riches as the wager on the NBA odds. As we head into another week of pro hoops, here are some news and notes to keep in mind when sizing up spreads and totals with top sportsbooks.

Spurred in San Antonio
One of the NBA’s all-time best franchises may be going through a transition in 2019-20. The San Antonio Spurs have stumbled from the starting blocks, opening the schedule with a 5-7 SU record and going just 3-9 against the spread in those games, including a 1-6 ATS record at home.

The Spurs, who have seen their once-fearsome defense slip, are currently ranked the worst bet in the Association – thanks in part to that legacy of being a superior franchise. San Antonio has allowed an average of almost 114 points per game and has been a pointspread favorite in eight of those first dozen contests.

A current four-game losing streak running into the weekend has seen the Spurs’ defense faulter even further, allowing totals of 135 and 129 points in that span. After one game versus Portland at home, San Antonio hits the road for the next four outing, including stops on the East Coast.

Total topping T-Wolves
The Minnesota Timberwolves are lighting up the scoreboard in the opening month of the season, putting up more than 117 points per outing – sixth highest in the NBA. That’s helped make Minnesota the top Over team in the league, at 9-3 Over/Under entering the weekend.

The Timberwolves defense is also playing a significant role in those total returns, giving up just under 118 points against. Opponents have been able to punish the T-Wolves from beyond the arc, leaving the team to rank 29th in defending from distance.

Minnesota runs into Houston Saturday, which should produce plenty of points. However, the T-Wolves then play a home-and-home set versus the Utah Jazz, one of the NBA’s toughest defenses and a team that enters the weekend with a 3-9 Over/Under record.

Barking dogs
Underdogs have been a 54% ATS return so far in 2019-20, but there are a handful of NBA teams pushing that trend by overachieving versus the spread. Two teams – the Washington Wizards and Phoenix Suns – have been providing consistent profits when getting the points.

Washington comes into Saturday with a 5-1-1 ATS record as an underdog. The Wizards are playing without star guard John Wall this season but haven’t skipped a beat on offense. They’re pouring in almost 118 points per game and shooting an efficient 47% from the field. Washington heads to Orlando Sunday then plays three straight in DC this coming week.

The Suns boast a 4-1 ATS record as dogs with an NBA-best 9-2 ATS mark overall on the season. Phoenix, much like Washington, is scoring in surplus with 117.6 points per outing. The Suns are shooting almost 39% from 3-point range, knocking down an average of 13.6 shots from beyond the arc a night. Phoenix is off this weekend, before welcoming Boston to the desert Monday.