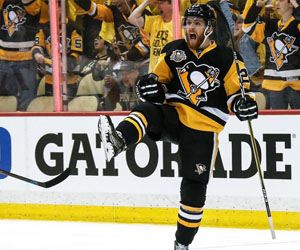 The NHL season hits the home stretch before the holiday break, giving teams a much-needed three days off before starting the road to the All-Star Game and eventually, the Stanley Cup playoffs.

Before hockey takes this hiatus, the best online betting sites look at the front runners to win Lord Stanley as well as a live longshot that could cash in big. And if you know the NHL, you know that anything can happen once the postseason begins.

Favorites
Washington Capitals +600 – The top team in the Eastern Conference is two seasons removed from winning the Stanley Cup, and looks to be back on the same path with a 24-6-3-2 start to the 2019-20 season. The Capitals have the second-best scoring attack in the NHL, finding the back of the net 3.2 times per outing, while limiting opponents to only 2.8 goals against. Special teams have been the standout for Washington, which ranks Top 5 in both power play and penalty kill.

Boston Bruins +700 – The Bruins are chasing the Capitals in the Eastern Conference standings and looking to not only return to the Stanley Cup final but win it, after losing out to the St. Louis Blues in last year’s championship series. Boston is scoring 3.4 goals per game and is lethal with the man advantage, boasting a power-play percentage of 26.4. The Bruins are backed behind a stifling blueline and solid netminding from the tandem of Tuukka Rask and Jaroslav Halak.

Colorado Avalanche +900 – The Avalanche are one of the top up-and-coming teams in the NHL and have enjoyed a 22-10-3-0 record – third-best in the Western Conference standings. So why is Colorado ahead of teams like St. Louis and Arizona in the Stanley Cup futures? The top scoring attack in the NHL – that’s why. The Avs are piling on the goals with an average of 3.6 per night. Colorado also has one of the best home-ice advantages in the league, forcing visitors to play in the thin Rocky Mountain air, which has led to a 10-4-2-0 record inside the Pepsi Center.

Longshots
Vegas Golden Knights +2,000 – Speaking of home-ice edges, the Vegas flu is very real with visiting teams getting caught up in the Sin City nightlife and helping VGK build a 10-6-3-0 record inside T-Mobile Arena. The Golden Knights score just under three goals per game, but those numbers should improve as they continue to get plenty of shots on goal and own the seventh-best power play in the NHL. Expect Vegas to make some moves to bolster their blueline at the trade deadline and make another run at the Cup final.

Pittsburgh Penguins +1,200 – The Penguins still pack a punch with superstars like Sidney Crosby and Evegeni Malkin on the ice. Pittsburgh has a slower start to the season but is playing solid hockey heading toward the holiday break, winning seven of its last 10 games. Goaltender Matt Murray has struggled at times but the Pens have a solid No. 2 option between the pipes in Tristan Jarry. Pittsburgh is currently seventh in the East but if they stay hot, that playoff seeding will vastly improve.