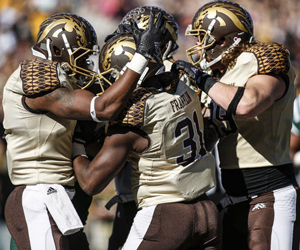 The latest of our sports betting articles focuses on teams this college football season who have left us both pleasantly surprised and extremely disappointed.

Western Michigan Broncos (7-0 SU, 6-1 ATS)
Western Michigan is running things in the MAC East and comes into Week 8 ranked 20th in the country. Now, it’s going to take more than an undefeated schedule to get the Broncos into the college football playoff conversation – like some bad losses from Power 5 contenders. But, as it pertains to pointspreads, WMU has been at the top of the class, with a 6-1 ATS mark heading into Saturday’s home date with Eastern Michigan.

Colorado Buffaloes (5-2 SU, 7-0 ATS)
Colorado is the only unblemished program in the country at the sportsbook, covering in all seven of its games so far, having done so as a big underdog and big favorite. The Buffs thrashed Arizona State 40-16 as 10.5-point chalk in Week 7 and now face Stanford this coming Saturday. Colorado has found great balance on both sides of the ball, ranked 14th nationally in both offensive yardage (515.3) and defensive yardage (312.9).

Michigan State Spartans (2-4 SU, 1-5 ATS)
The Green and White were dark horses in the Big Ten this season, expected to put a scare in rivals Michigan and Ohio State. But, Michigan State couldn’t even get past the other teams on its schedule. The Spartans were clobbered at home by Wisconsin, which sent the program into a nose dive. They’ve now lost four straight, failing to cover as favorites in each of those contests, including an embarrassing 54-40 loss to Northwestern this past weekend.

Oklahoma Sooners (4-2 SU, 2-4 ATS)
The Sooners were expected to be among the national title contenders but after dropping their opener to Houston and getting rolled by Ohio State, Oklahoma will be watching the playoffs from the sidelines. Now, the Sooners have picked it up the past few weeks, including a win over rival Texas, but OU has a challenging final stretch of sked left. Oklahoma has trips to Texas Tech, Iowa State, and West Virginia remaining between home dates with Baylor and Bedlam rival Oklahoma State.