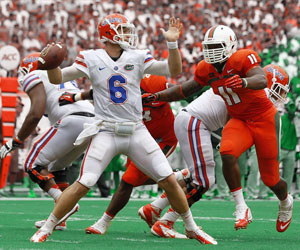 College football makes its return to the top sportsbooks betting board with a pair of games Saturday night: Miami versus Florida and Arizona at Hawaii.

We take an inside look into these opening matchups, odds and best bets to kickoff off the 2019 NCAA football schedule:

Miami Hurricanes vs. Florida Gators (-7.5, 47.5)
This Florida rivalry returns for the “Week 0” opener, with the Gators opening as 7.5-point favorites back in the spring. Action over the summer drove the spread as high as -8 and when sharp play took back the Canes, it moved the side as low as -6.5 before settling around a touchdown.

Miami has stolen a lot of the headlines in recent weeks, with Ohio State transfer Tate Martell getting beat out for the starting quarterback job by Jarren Williams, leaving Tate to pursue a starting spot as a receiver. Williams, a redshirt freshman, will be working with new offensive coordinator Dan Enos and a thinned o-line that lost five of their seven experienced bodies from last year.

The Gators are coming off a 10-win 2018 and head coach Dan Mullen returns quarterback Feleipe Franks, who exploded down the stretch of last season with 12 touchdowns in the final four games – all victories. On defense, the Gators bring back seven starters and have depth for a unit that caused plenty of turnovers, with 12 fumbled recoveries and 14 interceptions.

The total for Saturday’s game in Orlando has dropped from 50.5 to 47.5

Arizona Wildcats at Hawaii Rainbow Warriors (+11, 74)
Arizona heads to the island where books have the Wildcats giving double digits to the host Warriors. Books opened with Arizona as a 12-point chalk but that has since slimmed heading into game week.

The Wildcats have one of the most electrifying players in college football leading the charge, in quarterback Khalil Tate. The dual-threat QB amassed over 2,500 yards passing with 26 touchdowns in 11 games last season and is a favorite dark horse to win the Heisman. Also back for Zona is running back J.J. Taylor, who finished second in the Pac-12 in rushing with 1,434 yards but just six touchdowns.

The Warriors had one of the worst defenses in the country last season, allowing 439.8 yards per outing. While Hawaii brings back plenty of starters on that side of the ball, there’s no guarantee they’ll improve. Offense has always been the name of the game in Hawaii, and quarterback Cole McDonald had a solid 2018 despite battling injuries down the stretch.

The pace of Saturday’s game should be extremely quick, which is why the total is steadily climbing from its opening spot of 70 points to 74. That’s the second-highest Over/Under on the board in this extended Week 1, behind the 83 points pegged for Houston vs Oklahoma.