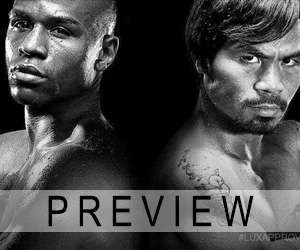 Anyone that tells you boxing is dead has been living in a cave for the past few months or at least since Floyd Mayweather Jr. and Manny Pacquiao inked their deal to meet in one of the most anticipated fights in years on May 2. A bout this big begs to be bet on and is a perfect reason to sign up for a new online sportsbook account and take advantage of sportsbook promo codes to get the best bang for your boxing buck.

The Mayweather-Pacquiao chatter started in 2009 and even prompted some oddsmakers to release pending prices on this superbout, with Mayweather opening as a slight -145 favorite against Pacquiao at +115. However, the two sides could never get the fight on paper, leaving Mayweather to run up his undefeated mark to 47-0 while Pacquiao was dealt two blemishes: a controversial decision loss to Timothy Bradley and a devastating KO loss to rival Juan Manuel Marquez.

Itâ€™s that recent history that has mutated those original numbers to what they are less than a week out from fight night. Mayweather reopened around a 3/1 favorite and action on the underdog Pacquiao has trimmed this price as low as 2/1, before money came back on the man known as â€œMoneyâ€. And there is plenty of action to come with an estimated 75 percent of the total handle still to be bet between now and Saturday night.

Boxing fans wagering on Pacquiao are counting on his relentless attack and active rounds, trying to get inside on Mayweather and put the champ on his heels. Those betting on Mayweather are banking on his counter punching, ability to adjust from round to round, and his slick style to keep a safe distance from Pacquiaoâ€™s power and pick up points on the judgesâ€™ scorecards.

Oddsmakers are expecting this fight, much like Mayweatherâ€™s last five bouts, to go the distance with a hefty pile of chalk on the Over 11.5 round total. Pacquiaoâ€™s last seven victories have also come by way of decision. But if he does get down on rounds early, his only shot of winning the fight may be to KO Mayweather, who has only been knocked down twice in his career.