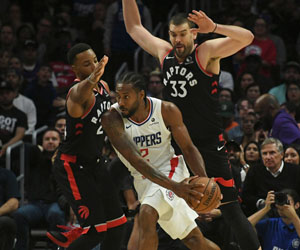 The Christmas Day schedule is coming closer and closer, with the marquee holiday games looked at by some as the unofficial start to the NBA season. But before those December 25 showdowns, basketball top sportsbooks bettors have just under three weeks of hoops to handle.

Here are some angles, news and notes for betting the NBA odds this week.

Living in La La Land
The Los Angeles Clippers shot to the top of the NBA futures board after landing Kawhi Leonard and Paul George this offseason. And with the addition of those two superstars, NBA bettors knew the big pointspreads were coming the Clippers way – making them a tough team to bet due to all that public padding at the sportsbook.

That’s been a half truth so far in 2019-20, with Los Angeles going just 2-6 ATS on the road (among the worst road bets in the NBA) but a profitable 10-4 ATS at home (one of the top home bets). The difference maker has been the Clippers’ defense on the road, allowing only 103.6 points against inside the Staples Center but giving up more than 115 average points against as visitors.

Los Angeles might be a stay-away or fade option for the next week or so, playing six straight away games on an East Coast road trip that reunites Leonard with his former team, the Toronto Raptors, next Wednesday. Emotions will be high in Toronto after Leonard spurned the Raptors after winning the NBA title, and chose L.A. in free agency.

North of the border
And, speaking of the Raptors, Toronto has also showed some odd home/away splits when it comes to its total results so far this season. The defending NBA champs are one of the best Over plays when at home in the Great White North, topping the total in eight of their 11 home dates so far. However, when Toronto crosses the border, those Over/Under returns flip-flop, with the Raptors going 4-6 O/U as visitors.

Toronto has shown a decisive home-court edge this season, owning a 9-2 SU mark and an 8-3 ATS record inside Scotiabank Arena. The Raptors are 118.5 points per home stand – a difference of almost 12 points when compared to their scoring production on the road. Toronto is shooting almost 48% from the floor in front of the Canadian faithful, a jump from its 44% shooting clip on the road. Defensively, the Raps are tougher on the road, giving up about four extra points per game at home.

The Raptors enjoy a bit of a break before two road games at Philadelphia and Chicago before coming home for a trio of home games, including that important matchup with Leonard and the Clippers on Dec. 11.

Kyrie who?
The Brooklyn Nets are without star guard Kyrie Irving due to a shoulder injury, taking him out of the lineup since Nov. 16. Irving, who is averaging 28.5 points per game in his first season in Brooklyn, is scheduled to return to action later in the month, but basketball bettors may not need him to rush back.

In the 10 games without Irving, the Nets have gone 7-3 SU and ATS, including a three-game ATS winning streak heading into the weekend. Brooklyn was either an underdog or slight favorite in those 10 contests and should continue to see favorable spreads as the upcoming schedule has them playing Charlotte twice, Denver, Toronto and Philadelphia – all before Irving is set to return.