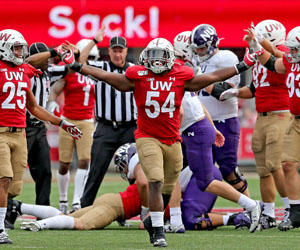 The college football schedule is heading into its home stretch in Week 9, and a handful of huge game will have implications for the CFP Final Four as well as upcoming bowl games.

The best online betting sites are looking to plan their Saturday of watching and wagering should start with these three blockbuster games featuring Top-25 programs:

Wisconsin Badgers at Ohio State Buckeyes (-13)
Wisconsin got caught in a bad lookahead spot at Illinois this past weekend, losing 24-23 to the Fighting Illini as 31-point road favorites. The Badgers’ hopes of making the CFP cutoff are likely over but a win over Ohio State could salvage what’s left of their 2019, and maybe get them back in the conversation if other top programs stumble before the end of the year.

The Buckeyes have gotten better by the week, coming off a 52-3 blasting of Northwestern in Week 8. Ohio State has covered in six straight games heading into the Wisconsin matchup, leaning on its thunderous rushing attack and second-ranked defense to control the pace of the game. With both teams looking to establish the run and both posing a challenge on defense, this could be a low-scoring grinder in the Big Ten.

Auburn Tigers at LSU Tigers (-6.5)
The tangle of Tigers is the showcase game in the SEC this Saturday, with undefeated LSU looking to inject its playoff hopes with a major boost – if it can knock off Auburn at Death Valley. Louisiana State has found its rhythm on offense in 2019, led by Heisman hopeful Joe Burrow, complementing what is always a solid stop unit.

Auburn was on pace for playoff contention for most of the season before dropping a Week 7 meeting with Florida. The Tigers rebounded from that loss with a 51-10 blasting of Arkansas this past weekend. Auburn will lean on its 11th-ranked rushing offense to pound the ball and keep Burrow and the LSU offense off the field. This Week 9 war will be Auburn’s third straight road game.

Notre Dame Fighting Irish at Michigan Wolverines (-6.5)
After a loss at Penn State last Saturday, a second defeat on the season for Michigan, this game between college football power programs holds a little more weight for the Fighting Irish, who with one loss have a better hope at the New Year’s Day bowl appearance. Notre Dame really need a victory over a notable team to boost its resume and has two weeks to prepare for the Wolverines.

Michigan took yet another loss to a Top-10 opponent at Happy Valley Saturday. The Wolverines once-elite defense has shown major cracks in recent games, and can’t keep the team – and a terrible offensive attack – afloat any longer. Head coach Jim Harbaugh is on the hot seat for these remaining games, and a loss to Notre Dame at home and likely Ohio State in the season finale, could seal his fate in Ann Arbor.