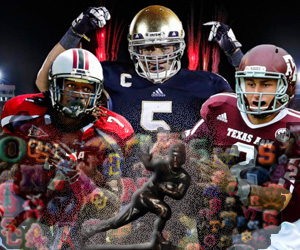 The college football season is so close you can almost hear the band. NCAAF bettors have their ears to the gridiron in these final weeks of the offseason, hoping to pick up some valuable edges and information that will make the difference when wagering on Week 1. Here are three interesting angles to follow in the opening slate of the college football schedule:

Gamecocks QB quandary
There’s a saying in football: If you have more than one No. 1 quarterback, you don’t have any. South Carolina finds itself in that situation heading into 2015, bidding farewell to Dylan Thompson under center.

Steve Spurrier weighs four possible options at QB, looking at third-year sophomore Connor Mitch, junior Perry Orth, redshirt freshman Michael Scarnecchia, and true freshman Lorenzo Nunez. South Carolina could be playing musical chairs in the first few weeks of the season, including a Week 1 rivalry game with North Carolina. The Gamecocks are 3-point favorites in Charlotte but could have trouble finding their rhythm on offense if they keep switching out passers.

Spartans looking past Western Michigan
Michigan State has been counting down the days to its rematch with Oregon. Last season, the Spartans had the Ducks on the ropes for most of the first half before running out of steam against Oregon’s up-tempo attack. Oregon eventually wore out MSU for a 46-27 win – outscoring the Green and White 28-3 in the final two quarters.

Michigan State plays host to the Ducks in Week 2, set as a 2.5-point early favorite, but before that the Spartans stretch their legs against instate rival Western Michigan. The Broncos gave Michigan State a little scare back in 2013 and enter Week 1 as 19-point underdogs in Kalamazoo. Sparty could be looking ahead to Oregon and may not open up their full playbook, saving something for Week 2.

Johnson’s coming out party
If you’re looking for an early Heisman Trophy sleeper pick, look no further than Auburn junior QB Jeremy Johnson. He’s played limited snaps behind Nick Marshall the past two seasons but now gets the starting job, and a chance to show his explosive arm strength and accuracy.

Johnson is currently listed at +2,000 to win the Heisman but if you check with some NFL scouting services, there are a number of teams with a close eye on the 6-foot-5, 240-pounder. Auburn opens the season with a strong non-conference challenge, playing Louisville as a 10.5-point neutral-site favorite in the Georgia Dome. Johnson’s performance could be hindered if standout WR D’haquille “Duke” Williams remains suspended for Week 1.