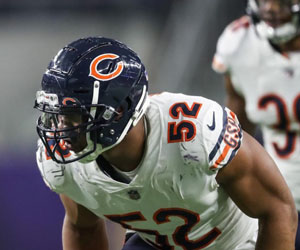 The Chicago Bears have been stewing over a 10-3 loss to the Green Bay Packers since the NFL season opener last Thursday, and get their first shot at erasing that poor effort on Sunday Night Football. Chicago goes up, up, up to Mile High to face the Denver Broncos, who are getting 2.5-points from the best online betting sites in NFL Week 2.

If you’re betting on the Sunday Night Football odds, here are some angles you need to know:

Declawed Bears
Chicago’s offense entered the 2019 campaign with a lot of buzz in Year 2 under head coach and offensive guru Matt Nagy. But the Bears couldn’t get untracked in the opener versus the Packers, going just 3 for 15 on third down and averaging only 3.9 yards per play.

Third-year passer Mitchell Trubisky had a tough Week 1, connecting on just 26 of his 45 throws for 228 yards and interception while facing pressure from the Packers stop unit and getting sacked five times. The Bears have had some extra time to work on the playbook, given the opener was on Thursday, and that could be key for Trubisky and Chicago.

Air up there
Denver is an extremely tough place to play in early into the season, due to a lack of conditioning in the thin air at Mile High – which isn’t just a name. The Broncos haven’t been that great a bet at home in recent outings, covering just three times in their previous 13 games in Denver.

Chicago runs a faster-paced attack on offense and could hit the wall in the second half as it battles a physical Broncos stop unit, as well as the altitude. Last season, Denver gave up only 9.2 points in the second half per game – fourth lowest in the NFL – and only 4.1 points per fourth quarter. Chicago was shutout out for the final three quarters of football against Green Bay.

What do you know, Joe?
Joe Flacco is the recent quarterback to start for the Broncos, in what is a growing list of QBs to stand under center for the franchise in recent years. Flacco, who was signed this offseason after years in Baltimore, looked flat in Week 1, connecting on 21 of 31 passes for 238 yards and a touchdown.

Those stats came against the Oakland Raiders in Week 1 – one of the worst defensive teams in the league. Now, Flacco and the Broncos take on the Bears and their elite stop unit. Chicago will put a lot of pressure on the Denver offensive line Sunday night, a group that allowed three sacks to the Raiders last Monday.

The Bears had five sacks and checked Aaron Rodgers to just 203 yards passing in Week 1, allowing just 10 points in that season debut. Chicago has played Under the total in six straight road games going back to last season while the Broncos have stayed Under in seven straight home stands. The total for Sunday’s game is set at 44 points.