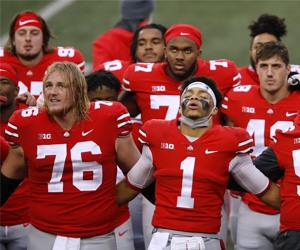 The GAME… A battle for the Big Ten East Championship. A spot in the CFP Top 4. A legacy game for Jim Harbaugh. The man hasn’t beaten Ohio State in his tenure and the Buckeyes are rolling everyone in their path since Oregon went to Columbus and ran sweep left to a victory.

Michigan is looking to avoid allowing Ohio State to match the rivalry’s longest winning streak of 9 (Michigan from 1901-1909).

The Buckeyes bring the nation’s best offense to Ann Arbor, led by a stacked receiving trio of Chris Olave, Garret Wilson, and Jaxon Smith-Njigba (All looking to be first-round picks in the NFL draft when eligible).

CJ Stroud has been as dominant as any player in the country since week 3 and is playing like a college football version of Chris Paul. The Wolverines are bringing their pair of future NFL stars to combat the strong offense of the Buckeyes.

Adian Hutchinson and David Ojabo have wreaked havoc on the Big Ten this season. For the Wolverines to have a chance those two MEN are going to have to be living in the backfield.

This game has the potential to be the same style of slugfest that our fathers grew up watching. Ohio State can put teams away in no time if they get a turnover and a stop. You look up and all of a sudden, you’re down 21. Just ask Purdue or Michigan State.

Thank you Seniors for all you have done for this progra❌! #GoBucks pic.twitter.com/96cstcOyxc