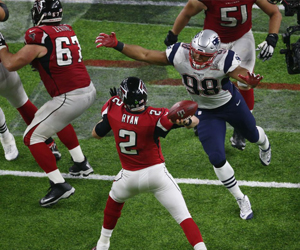 The Atlanta Falcons face a tough test when they host the red-hot New England Patriots on Thursday Night Football. New England has won four straight games and they’re just a half-game behind Buffalo in the AFC East while Atlanta has lost two of their last three contests.


The Patriots opened at -7.5 at BetOnline and over at FiveThirtyEight, they have them at -5.
FiveThirtyEight gives the Patriots a 67 percent chance to win. For support, we turn to USA Today’s Jeff Sagarin’s projections; he has New England at -7.31using his Rating numbers and at -6.71 using his eigenvector analysis.

This leaves a 2.5-point gap between the FiveThirtyEight projections for the and the actual NFL odds for the Falcons.

Is Atlanta catching too many points at home?

Patriots quarterback Mac Jones is coming off his best game of the season, leading the team to an impressive 45-7 home win against the Browns after completing 19 of 23 passes for 198 yards and three touchdowns. He did this against a fearsome pass rush and good secondary and he’ll be full confidence on Thursday.

Atlanta got blown out 43-3 at Dallas, giving up 29 points in the second quarter. That kind of implosion can’t happen against a team like New England.

The Falcons will miss Cordarrelle Patterson, who sprained his ankle sprain on Sunday and blew their entire offensive plan out the window. With Patterson out, it will be up to rookie tight end Kyle Pitts to move the ball, as players like Mike Davis and Wayne Gallman have been underwhelming.