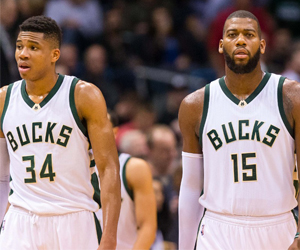 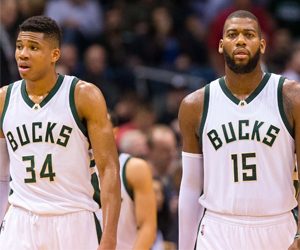 The NBA offseason was arguably as entertaining as the action on the court, with plenty of big names swapping jerseys this summer. Not only did that keep NBA title futures on the move but also had oddsmakers shaking up the live odds comparison for the MVP odds for the 2017-18 campaign.
With the formation of more “super teams”, like Oklahoma City, Houston, Boston, and Minnesota, to keep pace with the Golden State Warriors, value in the MVP market could be opening up as the league’s top players trade in individual glory for a run at the championship.
Here are three players who could surprise basketball bettors with a MVP year and cash in big, given their MVP odds to start the season:
Giannis Antetokounmpo, Milwaukee Bucks (+500)
At 5/1, the “Greek Freak” isn’t a live long shot to win MVP. Antetokounmpo is tied as the fourth overall favorite to win the honor this upcoming season, but presents a much higher chance of actually cashing in than the players in front of him. He’s the Bucks’ main attraction and if Milwaukee makes a run at the postseason – and let’s face it, in the East that’s pretty easy – it will all be on Antetokounmpo.
He led the team in just about every major category in 2016-17, scoring 23 points per game, dishing out 5.4 assists, and grabbing almost nine rebounds an outing. And to add fuel to the fire, former MVP Kobe Bryant issued Giannis a “Mamba Challenge” this offseason: win MVP. Maybe Kobe is grabbing Antetokounmpo at +500 as well?
Karl Anthony Towns, Minnesota Timberwolves (+4,000)
The Timberwolves made a splash this summer by adding shooting guard Jimmy Butler (+4,000 to win MVP) to a roster headlined by Towns and small forward Andrew Wiggins (+5,000). While Butler will demand touches, Minnesota’s man in the middle is still the beating heart of this team. Towns averaged more than 25 points and 12 rebounds last year, and was a presence in the paint with 1.3 blocks per game.
The Western Conference is going to be rough on all of its members, with so much talent swinging to that side of the Association. If the T-Wolves can crack the Top 5 of the West, it will be due to Towns’ two-way play. He will have to step up his defense to really grab the eyes of MVP voters, as well as continue to develop his mid-range game. But the foundation is there for a MVP season.
DeMar DeRozan, Toronto Raptors (+5,000)
The MVP pool is thick in the West, so there could be more value looking to the Eastern side of the NBA. Outside of LeBron James, the race for the East’s top player – or second-best player – is up for grabs. Antetokounmpo, Kyrie Irving, John Wall, Gordon Hayward, and Isaiah Thomas come to mind, but DeRozan isn’t getting much buzz all the way north of the border.
Toronto is arguably the third or fourth best team in the Eastern Conference, with DeRozan coming off an All-Star season in which he poured in over 27 points per game. He’s a solid shooter around the key and a strong finisher at the rim, and would need to fine tune his perimeter play as well as playmaking ability to rival James for the East’s top talent. Should DeRozan push the Raptors past the Wizards, Celtics or Cavaliers, he would absolutely need to be in the MVP conversation.