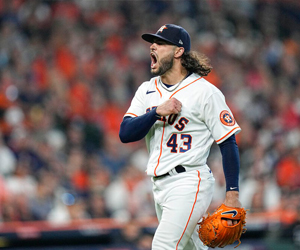 The Braves took a massive step towards ending their 26-year championship drought by winning Game 1 of the World Series 6-2. Jorge Soler led things off by taking the third pitch of the game deep to left field for a home run, the first ever lead-off homer in Game 1 of a World Series.

The Braves scored in each of the first 3 innings and the Astros could not keep up. They will need to regroup quickly before tonight’s game two.

Starting Pitchers: Max Fried (ATL) vs. Jose Urquidy (HOU)
In three starts this postseason, left-hander Max Fried is 1-1 with a 3.78 ERA and seventeen strikeouts. His last outing was not so great, going just 4.2 innings and giving up five runs on eight hits in an 11-2 loss to the Los Angeles Dodgers. Tonight will be his first appearance in the World Series.

Jose Uriquidy has only had one start this postseason and it was not great. He lasted just 1.2 innings in Boston, giving up six runs on five hits in a 12-3 beat down from the Red Sox. That was his one and only postseason start in his career.

What’s the Play?
Astros’ manager Dusty Baker said he believes there will be rust on pitchers before they start to wear down, and he believes Urquidy just had a little rust in his last outing. He is anticipating a quality start from his starter, and he’ll need it if the Astros stand a chance. Likewise, Fried is coming off a tough start. Both pitchers will be looking to put K’s on the board to give their team a chance to win.

Ready to bury your bookie?

The Braves took a massive step towards ending their 26-year championship drought by winning Game 1 of the World Series 6-2. Jorge Soler led things off […]
Do you like it?0
0 Read more