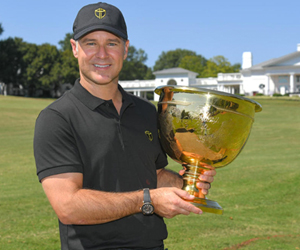 The Field for the 2022 Presidents cup was completed on Tuesday with the Captains making their 6 at-large selections for the US vs The World format. The United States is looking to maintain the cup, after the 2019 victory at Royal Melbourne led by Tiger Woods.

This is the first Presidents Cup without Tiger and Phil Mickelson in nearly 25 years. The US team is strong, and the World team has been gutted a little more by the LIV Tour, but still presents a great challenge.

The World team has only 2 of the top 20 players in the world, Hideki Matsuyama and Sungjae Im, and the captain’s picks didn’t include a single top 40 player.

They have some decent experience with Adam Scott, Corey Conners, and Si Woo Kim, but their chances got longer after Cam Smith and Joaquin Niemann departed for the LIV.

Half of the US team has experience in this event, but most were also part of the triumph last year at the Ryder Cup.

The Captain’s picks are playing some pretty spectacular golf of late. Max Homa is coming off a top 10 FedEx cup season including 2 wins, plus he’s won on Quail Hollow.

Billy Horschel is fiery and has been very vocal this year, he has to be thrilled after not getting the nod for the Ryder Cup last year. He is known as one of the streakiest putters in the world, and you need to be rolling the rock to win in these events.

Cameron Young didn’t get a win this year, but he was the rookie of the year on tour. He finished in the top 3 7 times this year and has the game to win big once he figures it out. As mentioned above, Kevin Kisner was chosen because of his ability to rip souls out in Match Play. He isn’t the longest player on tour, but he may be the best putter on tour.

Rounding out the team are Jordan Speith and Colin Morikawa were very big contributors to the 2021 Ryder Cup title and will be staples in these formats for their entire careers.

The U.S. Team is locked in for the @PresidentsCup.

The Field for the 2022 Presidents cup was completed on Tuesday with the Captains making their 6 at-large selections for the US vs The World […]
Do you like it?0
0 Read more