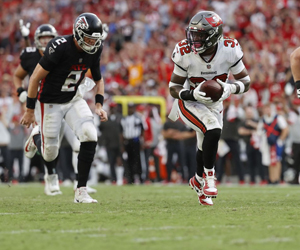 The Tampa Bay Buccaneers (8-3) will look to continue their dominance in the NFC South this week against the Atlanta Falcons (5-6).

The Buccaneers have been in control of this division for nearly the entire season and are the only team in NFC South that are above .500. The Falcons with a win in this contest can change this by breaking even on the season.

Here we have a Super Bowl defending champion Buccaneers have won two straight games, this previously after losing just as many. Quarterback Tom Brady and the Bucs will look to pulverize a weak defense In the Falcons. The Falcons are allowing over 27 points per contest, which is the second most in the league.

The Falcons have been inconsistent this season, usually following a win with a loss, and the pair met back in September already – a contest in which the Buccaneers put up 48 points on the lethargic Falcons defense.

The Falcons will have to rely on do-it-all running back Cordarrelle Patterson and rookie tight end Kyle Pitts to even have a fighter’s chance in this tough matchup. This will be a daunting task facing an opponent with such a multitude of talent on the offensive and defensive side of the ball.

The odds are clearly in favor of the defending champion Buccaneers and this is reflected below.