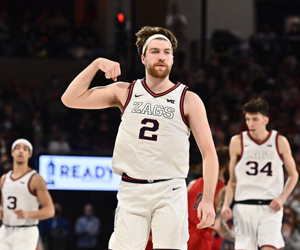 March Madness will begin in a couple of days. Unlike past seasons, no one team is significantly better than the rest. However, there are a handful of teams that could win it all.

Gonzaga’s whole starting lineup is productive. It all starts with junior forward Drew Timme. Timme’s numbers actually slipped a little bit from last year, but he is still very tough to guard. He leads the Bulldogs in scoring with 17.5 points per game. He struggles shooting three-pointers but hits 58.8% of his shots from the field. Timme also grabs 6.3 rebounds per game.

Drew Timme was outstanding, but center Chet Holmgren has even greater potential. Holmgren is a 7’0” freshman center who can ball handle, hit threes, and attack the rim. He is also a projected lottery pick in this year’s NBA Draft. Holmgren averages 17.5 points per game on 61% shooting from the field and 41.2% three-point shooting. He is a dominant rebounder and fierce rim protector. He grabs 9.6 rebounds and blocks 3.6 shots per game.

Shooting guard Andrew Nembhard has also been a critical piece to this Gonzaga team. The Canadian senior is heavily depended on and leads the Bulldogs in minutes per game at 31.4. He is the best passer in the West Coast Conference and averages 5.7 rebounds per game. In addition, he is a pest on the defensive end and steals the ball 1.6 times per game.

I cannot talk about this Gonzaga squad without mentioning point guard Rasir Bolton. Bolton’s stats are not that impressive; he scores 11.2 points per game and gets 2.3 assists. However, his impact goes far beyond that. The 6’3” senior runs the highest-scoring offense in the country, an offense averaging 87.8 points per game. His contributions cannot often be seen on a score sheet, but he makes his team better.

The Bulldogs are a veteran squad and have been to the championship game twice in the last four years. They have been in this situation before and have excelled. If you combine their experience with their veteran presence, you have a winning recipe.

Which NCAAB team will win the tournament and why?

March Madness will begin in a couple of days. Unlike past seasons, no one team is significantly better than the rest. However, there are a […]
Do you like it?0
0 Read more