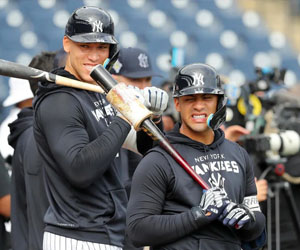 The Cleveland Guardians are heading to Yankee Stadium to take on the best team in the American League during the regular season the New York Yankees.

The Guardians are the youngest team in the playoffs, but they may be able to just play ball and not let the moment feel too big.

There are going to be a couple of massive talking points to this series. Starting with the American League presumptive MVP, Aaron Judge.

The Yankees rode a white-hot start to the season, and cooled off in the middle, but still had the best record in the American League.

The Yankees were carried all season by Aaron Judge. He set an American League record with 62 home runs this year while hitting over .310 and blowing the field away in RRBIs The last few weeks of the season though, the rest of the league decided to not let him beat them, walking him 17 times in the last 55 plate appearances.

These days off since the end of the season were welcomed by the Yankees. Matt Carpenter is back and Anthony Rizzo got more time to get back to health.

The Guardians are coming off a two-game sweep of the Tampa bay Rays. On Saturday, the Guardians had to play 16 innings and burned a lot of arms to get to this round. The game featured 16 scoreless innings and was walked off by Oscar Gonzalez, who broke the tie with a bomb.

The Guardians hit the second least home runs in baseball this season, but with that, they struck out near the bottom as a result of playing 1980s ball instead of today’s 3 Result offensive strategy.

This is going to be a clash of styles in this five-game set. The Guardians have the edge with their Manager, but it looks like the Yankees have the edge just about everywhere else.

The Cleveland Guardians are heading to Yankee Stadium to take on the best team in the American League during the regular season the New York […]
Do you like it?0
0 Read more