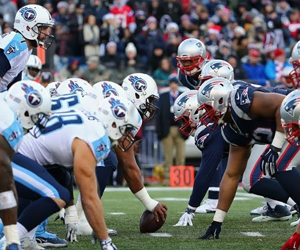 One of the most anticipated games in the NFL this week will undoubtedly be the matchup between the red-hot New England Patriots and the AFC South-leading Tennessee Titans.

Despite a very disappointing loss to the lowly Houston Texans last week, the Titans have proven to be a legitimate playoff contender even without superstar running back Derrick Henry. Tennessee has won six out of their last seven games and could face their toughest challenge against a resurgent Patriots squad led by rookie quarterback Mac Jones.

After starting the season at 2-4, the Patriots looked dead in the water, with head coach Bill Belichick potentially having made some bad decisions in the offseason. However, New England is reborn with five straight wins coming into this matchup with the Titans and a real shot to compete with the Buffalo Bills for the NFC East crown.

Jones has quickly become the best rookie quarterback in the 2021 class as he continues to lead this new-look Patriots team to victories on a weekly basis. Belichick has grown more and more confident with his rookie quarterback, and for good reason, Jones has shown poise and an ability to put the team on his back.

Although the Titans are a talented team, even without their best player, Tennessee could be in for another rude awakening at Gillette Stadium, with New England coming into their own at just the right time during this 2021 campaign.

If the Titans haven’t fixed their issues from last week, it’ll be a long day for Tennessee.

"Any time you go on the road to a team that's playing as well as the Patriots, I hope that we're all locked in and ready to go."

What the Titans are saying: https://t.co/YBDRBlBRZn

One of the most anticipated games in the NFL this week will undoubtedly be the matchup between the red-hot New England Patriots and the AFC South-leading […]
Do you like it?0
0 Read more