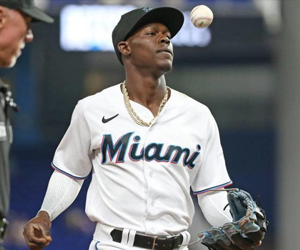 The Miami Marlins will face the Los Angeles Dodgers in the second game of a three-game series. These two teams could not be much different from each other and are heading in notably different directions. The Marlins are 52-67 and sitting in fourth place in the NL East.

They are 12.5 games out of the third Wild Card spot, so they have a chance to make the Playoffs. However, it is very unlikely and would require an insane turnaround for the rest of the season.

The Dodgers are baseball’s best team with their 82-36 record. They could mail it in for the rest of the season and still end in first place in the NL West. As of today, they have an 18-game lead over the San Diego Padres in their division.

Game one of this series would definitely be classified as a boring one. The score was tied at zero going into the seventh inning. Both teams went on to score one run in the seventh. Jerar Encarnacion hit an RBI double to give the Marlins the lead, but Trayce Thompson (brother of NBA superstar Klay Thompson) returned the favor in the bottom of the inning when he hit an RBI double.

Los Angeles took the lead in the eighth inning when Will Smith hit a fielder’s choice for an RBI.

The ninth inning was an interesting one. Joey Wendle led off for the Marlins and crushed a ball to center field, but Trayce Thompson got a good jump on it. Thompson timed everything perfectly and robbed a home run to save the Dodgers’ lead and game. Evan Phillips proceeded to get the next two outs for the Dodgers, and they won the game.

Their first four batters of Mookie Betts, Trea Turner, Freddie Freeman, and Will Smith, are so productive, and I cannot bet against them. In addition, I would bet on the Dodgers to cover the spread. Their bats struggled last night, but they will not today.

The Miami Marlins will face the Los Angeles Dodgers in the second game of a three-game series. These two teams could not be much different […]
Do you like it?0
0 Read more