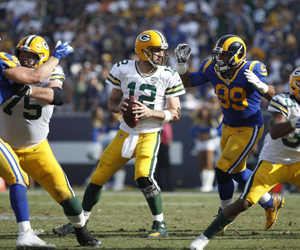 The 7-3 Los Angeles Rams will face the 8-3 Green Bay Packers at Lambeau Field on Sunday. This Packers can afford to lose a game as they play in the weaker NFC North, but the Rams desperately need a win to stay in the wild card hunt and be competitive with the NFC West-leading Arizona Cardinals.

The Rams are backsliding and have lost their last two games badly. They could not get their offense going last week against the San Francisco 49ers in their 31-10 loss. Rams quarterback Matthew Stafford threw one touchdown but also threw two interceptions. The Rams running backs also struggled and only had 51 combined rushing yards. The Rams need a win to show that they can still contend for a Super Bowl.

The Green Bay Packers are having another good season even though they have a lot of injured starters. They did lose 34-31 last week against the Minnesota Vikings, but that was because of defensive lapses. Aaron Rodgers threw for four touchdowns and almost 400 yards. The Packers have become one of the most challenging teams to beat in the NFC.

The Packers have the upper hand in this game. They have home-field advantage, but they also are not backsliding like the Rams are. If the Packers defense can stifle the Rams offense (like they have been stifled the last two weeks), they should win this game behind their home crowd. I would expect Aaron Rodgers to struggle, but not too much.

The 7-3 Los Angeles Rams will face the 8-3 Green Bay Packers at Lambeau Field on Sunday. This Packers can afford to lose a game as […]
Do you like it?0
0 Read more