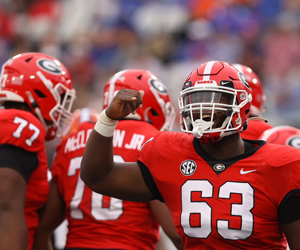 The second week of college football rankings have dropped and after last weekend’s heavy weight fights, some new teams have made it into the top four.

Last weekend 3 of the top six all lost, including #1 Tennessee, #4 Clemson and #6 Alabama.

The loss for the Crimson Tide and the Tigers of Clemson have all but eliminated them from playoff contention, while the loss for Tennessee at now #1 Georgia may actually prove to be a sneaky victory to get into the dance.

As mentioned before, the Georgia Bulldogs as the new number-one team in the nation. They swallowed Tennessee whole on Saturday and didn’t let them get off the mat. For Georgia to make it to the playoff they will just have to win the rest of their games, all of which they will be favored by double digits.

They host Georgia Tech, Kentucky, and visit Mississippi state. After they go wipe the floor with those competitors, they will be taking on the winner of the SEC West. Which currently looks to be the LSU Tigers.

The Ohio State Buckeyes come in as number 2. They struggled mightily against the dreadful Northwestern Wildcats on Saturday. The weather was terrible and they couldn’t get anything going offensively, but they were able to get out of there with a win.

The Buckeyes have the biggest stage against the number 3 team coming up, but they may want to stomp their next couple of opponents.

The Michigan Wolverines are the third-ranked team in the country as of today. They started slowly against Rutgers, but they wound up dominating them in Piscataway, New Jersey.

They have been bullying teams all year with a smash-mouth running attack and a great defense.They haven’t played a schedule worth noting yet, but they have been doing what they should be and killing these teams.

Number Four is the Horned Frogs of TCU. They are the last of the undefeated teams in power conferences and they control their destiny. They have a tough task this weekend in Austin.

They have had some great injury luck as the last 6 teams they have played have lost their starting quarterback during the game. They are finally getting a little bit of respect, but they have had a history of getting down early. That usually bites you at some point.

The rest of the contenders include Tennessee, the winner of the Pac 12 and there is a chance that if the winner of the SEC is from the west, they could make it. Tennessee has the best chance of any team that may not win their conference.

They should end the year with a loss at Georgia, and their wins should be enough to get them in. One of the Big Ten teams will make their way out of the dance unless things get weird, so a one-loss PAC 12 champ also has a chance.

That includes Oregon, USC, and UCLA. If one of those teams runs the table the rest of the way, they will have a great chance to be in the playoff.

Take a look at the full #CFBPlayoff selection committee rankings for games played through November 5.

Where does your team rank?