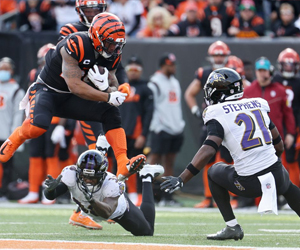 The final weekend of the NFL Season is upon us and we are loaded with great match-ups.

There are multiple match-ups that have playoff berths on the line for the game itself.

The AFC South is up for grabs, the Packers and the Lions are facing off for a wild card spot and the Bengals and the Ravens meet with serious seeding implications.

The number one seed in the AFC is up in the air, and multiple games will have a hand in deciding it. The NFL is going to have a potential problem on its hands, with the cancellation of the Buffalo and Cincinnati game for good reason. It does seem that Damar Hamlin is improving every day.

The AFC one-seed is a very complicated situation because of that game. There are multiple situations where the game could be played at a neutral site, due to there being a theoretical tie in the standings. The Bengals are in a bad position in comparison to the Chiefs and the Bills because they have the extra loss, despite not having the opportunity to beat the Bills.

There could be coin flips to determine the home field, possible neutral site games, and other strange intricacies that could come into play.

The Chiefs head to Las Vegas to take on the Raiders. If they win this game, they will be one of the top two seeds in the conference. The Raiders looked great on offense last week against the best defense in the NFL, the 49ers. However, their defense has been horrible.

This game could be a shootout, but the chiefs need this one to guarantee a top-two seed, they will be ready to play.

The Patriots visit the Buffalo Bills. The Patriots need to win to get into the playoffs, and the Bills need a win to guarantee some home-field advantages. The Bills are undoubtedly going to have their minds with Damar Hamlin, after last week’s collapse on the field.

The patriots can also make the playoffs if the Dolphins lose to the Jets, the Steelers lose, and the Jaguars win.

As mentioned above, the Patriots need the Browns to beat the Steelers to make the playoffs. The Steelers are surging late with Kenny Pickett and George Pickens leaping. The Steelers need to win and get a loss from the Patriots and the Dolphins to get into the tournament.

The last game that matters is Ravens heading to Cincinnati to take on the Bengals. This game looked to have major division implications, but the cancellation of the Bills game kept the Bengals with 4 losses and clear of the Ravens. Both teams are in, but if the Ravens win they are to play each other in the wild-card round, the game would be a neutral site, if the NFL has its way.

Good luck figuring that all out, but we have some thrilling theatre on the horizon.

The final weekend of the NFL Season is upon us and we are loaded with great match-ups. There are multiple match-ups that have playoff berths […]
Do you like it?0
0 Read more