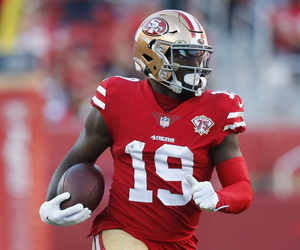 Taking a jaunt back to Week 10, a turning point that led to a remarkable reversal of fortune in the SF 49ers season all started with a brilliant decision by Kyle Shanahan. His team had lost 4-of-5 games coming into a home matchup with their hated NFC Rival L.A. Rams. On top of that, they hadn’t won a game on home turf in over a year.

Shanahan needed an infusion of mojo in a season that appeared to be heading toward the abyss, so he made an impromptu decision to run the ball at least 40 times.

Although Shanahan’s game plan would ultimately kick-start an amazing run that has them on the doorstep of another Super Bowl appearance, even he wondered if his playbook had written a check the offense couldn’t cash.

“I can’t lie,” Shanahan said on KNBR’s Tolbert, Krueger & Brooks show. “When I told them we’re going to run the ball 40 times, then I got up to my room later that night, I was like, ‘What was I thinking? That’s going to be so hard to do.’”

Coaches’ proposed ground attack would obviously see Elijah Wilson as the primary benefactor with Jeff Wilson Jr. also getting his share of touches. What the NFL world didn’t know was another name was about to make a stunning impact for the Niners’ going forward.

Prior to Week 10, WR Deebo Samuel had carried the ball six times for 24 yds in the first eight games of the season. Versus the Rams, he had 5 carries for 36 yds and a TD. Shanahan’s epiphany had paid off, and a new dynamic for their offensive scheme-age was born. The Niners’ officially ran the ball 44 times for 156 yds in their 21-point drubbing of the in-state rival Rams. Suddenly, the NoCal brigade had life.

MVP-Like Contribution
In the 49ers final eight contests — utilizing a creative mix from straight handoffs to end-around trickery — Samuel ran the ball 48 times for 307 yds and 6 TDs. He also caught 23 balls for 426 yds and a score. San Fran closed the 2021-22 regular season campaign winning 7 of their last 8 games. Perhaps in fitting fashion, in their Week 18 WC-clinching victory on the Ram’s home field, he gave us this:

AND HE CAN PASS 🤯

Frisco’s two road playoff wins saw Samuel run 20 times for 111 yds and a trip to the end zone. He also caught 6 balls for 82 yds. Although his performance was down a bit in the Green Bay chill, DB will have a much more fertile environment this Sunday at SoFi Stadium in SoCal.

Is Deebo Healthy?
The Niners’ evaded disaster with Deebo’s knee taking a helmet shot vs Green Bay; the exam was negative. Although Samuel has dealt with pain and some swelling, he’s scheduled to practice today and should be his usual self come game time. Another key injury to follow is All-World LT Trent Williams. While the consensus is he’ll play, just how effective Williams can be is a still a mid-week concern.

Final Thought:
Deebo Samuel has become a game-breaking threat who warrants the utmost respect from opposing DCs. Samuel’s output in the first two games vs the Rams this season is a prime example:

The Rams could reportedly have ILB Ernest Jones and S Taylor Rapp back in the lineup, but containing Samuel won’t be easy. If SF is to win their seventh-straight over the Rams and advance to Super Bowl LVI, smart money says Deebo will play a prominent role in what would complete a 49er’s road sweep on the way (back) to SoFi in two weeks.

Can the Niners’ Sweep the Rams? They’ll Need Another Big Day from Deebo

Taking a jaunt back to Week 10, a turning point that led to a remarkable reversal of fortune in the SF 49ers season all started with […]
Do you like it?0
0 Read more