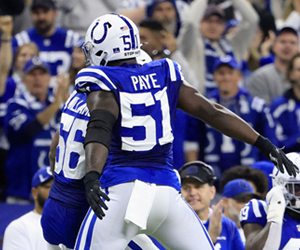 The AFC South had a very AFC South weekend. What has long been joked about as the worst division in football, may take the cake this year and be worse than imagined?

The division went winless in week 1 despite having an inter-division contest.

The Colts, Texans, Titans, and Jaguars lack QB talent, and wide receiver talent and look as though they even struggle at kicker.

The Titans were the number one seed in the AFC last year, and many thought that to be a fluke. Derrick Henry can be a dominant force in the league, but Ryan Tannehill is so limited.

They got rid of their Pro-Bowl wide receiver instead of paying the man. In week one they couldn’t stop the run against the lowly Giants. They had a chance to win the game in regulation, but Fat Randy missed the kick.

The Texans and thae Colts squared off against each other. This game was exactly what should have been expected. The Colts have been getting a little buzz after getting Matt Ryan in the off-season.

This game went to OT because Rodrigo Blankenship stinks, and wound up being a tie. Soccer game!

The Jaguars have the most potential at QB. Trevor Lawrence is supposed to be the next coming of Andrew Luck, and he just might be, in terms of being out of football by 29. They paid Christian Kirk top 10 receiver money for unknown reasons, and are hoping that Travis Etienne is a game breaker.

They batted with Carson Wentz and the Commanders this weekend and played decent. They allowed late scores and lost, but showed a little bit of improvement. Maybe they will have the second pick in the draft this year?

The AFC South had 0 wins in Week 1. pic.twitter.com/IN2Yv0Fdb9

The AFC South had a very AFC South weekend. What has long been joked about as the worst division in football, may take the cake […]
Do you like it?0
0 Read more