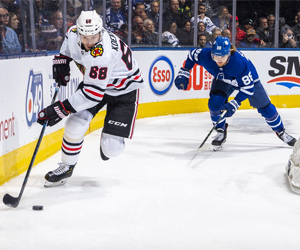 Two struggling teams are facing off tonight in Chicago as the Toronto Maple Leafs take on the Blackhawks at the United Center. Toronto is favored and the total is set at six goals.

Tale of the Tape: Toronto Maple Leafs (2-4-1) vs. Chicago Blackhawks (0-5-1)
Toronto has dropped their last four in a row and the offense is struggling to score. Granted, they faced off against a few contenders in the past week. But if you are going to give up goals defensively, you must be able to execute on the offensive end. Luckily for them, they come to Chicago at the perfect time to get on track.

There is so much going wrong with the Chicago Blackhawks, both on and off the ice.
On the ice, the team remains the only winless squad in the league and have yet to hold a lead in any contest, which is approaching historically bad levels. Off the ice, yesterday the sexual misconduct accusations officially came to light as the report and findings became public.

General Manager Stan Bowman “stepped aside” and anyone who was involved in the handling of the 2010 cover-up is no longer with the organization. The organization was also fined $2 million dollars by the NHL and a lawsuit is on the horizon. OH – and the Blackhawks have a plethora of guys in COVID protocol.

What’s the Play?
The handicappers at INSPIN love the side and total on this game.
Ready to bury your bookie?

Two struggling teams are facing off tonight in Chicago as the Toronto Maple Leafs take on the Blackhawks at the United Center. Toronto is favored and […]
Do you like it?0
0 Read more