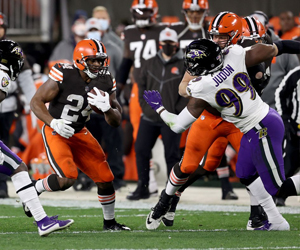 The Cleveland Browns will host the Baltimore Ravens on Sunday in a critical AFC North match-up.

These teams just played each other in Baltimore two weeks ago, with the Ravens winning 16-10 as a three-point favorite. Last week the Ravens lost 20-19 as a four-point favorite against the Steelers, and the Browns had a bye.

In the first meeting, the Ravens outgained the Browns 303 to 262 in total yards. Cleveland lost two fumbles but did win the turnover battle as they intercepted Ravens quarterback Lamar Jackson four times.

Jackson also completed 20 of 32 passes with a touchdown and rushed for 68 yards. Before the Baltimore victory, teams had lost 54 consecutive games when their quarterback had thrown four interceptions in a game.

The Browns are third in the NFL, tied with the Ravens averaging 147.1 rushing yards per game, but only picked up 40 rushing yards on 17 attempts in the loss.
With the lack of a running game, Baker Mayfield could not lead Cleveland to a game-winning drive in the fourth quarter and finished with 18 of 37 completions with 247 yards and a touchdown.

This game is just about a do-or-die situation for the Browns. With five games remaining on the schedule, Cleveland is 11th in the AFC and does not have any games left against a team with a losing record. The Ravens are sitting on top of their respective division and third in the AFC overall, just half a game behind the 9-4 Patriots.