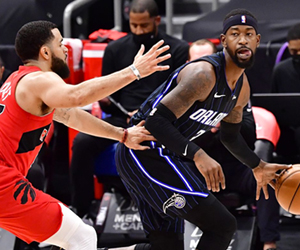 The Toronto Raptors will cross the Canadian border and travel to Orlando to face the Magic. The Raptors moved into seventh place in the Eastern Conference with their win against the Los Angeles Lakers on Wednesday.

Their opponents, the Magic, beat the Los Angeles Clippers in their previous game, but overall, they are having a tough season.

They are going through a rebuild and have the worst record in the NBA.

The Raptors beat a Lakers squad without Anthony Davis and Lebron James 126-113 in their previous game. They fouled the Lakers a lot but also forced them to turn the ball over 15 times.

Pascal Siakam was the best player on the court and finished with 25 points, ten rebounds, seven assists, and two steals. Fred VanVleet also scored 25, and O.G. Agunoby threw in 23. The Raptors played a stronger overall game.

They jumped out to an early lead and were up by 23 at the half. The Lakers tried to make a fourth-quarter run, but it was too little, too late.

The Magic snapped their nine-game losing streak on Wednesday and beat the Clippers 116-111 in overtime. The Clippers had a seven-point lead going into the final quarter, but Orlando fought back and took it from them in overtime.

Rookie Paolo Banchero led all scorers with 23 points. He did not shoot very well from the field but went 13-14 from the free-throw line. However, Cole Anthony was the spark plug Orlando needed. Anthony played 27 minutes off the bench and finished with a /- of 21.

Even though the Magic surprised the Clippers, I have to give Toronto the edge. They do not have an outstanding roster, but they are significantly better than the Magic.

Toronto has a squad of veterans and young guys with solid chemistry on the floor. However, Orlando is young and inexperienced. They will be dangerous in a few years, but right now, they will struggle. The Magic are inexperienced and going through growing pains.

In addition, the Raptors play dramatically better defense than the Magic. Toronto has a top-half defense, while Orlando has arguably the worst in the league.

I realize I just spoke poorly of the Magic, but they are an exciting team and fun to watch. However, I would not bet on them.

The Toronto Raptors will cross the Canadian border and travel to Orlando to face the Magic. The Raptors moved into seventh place in the Eastern […]
Do you like it?0
0 Read more