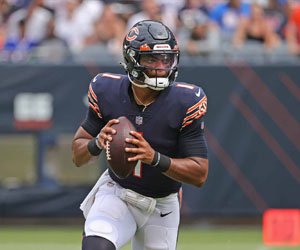 After last week’s debacle of a football contest, we luckily get to watch two stellar teams battle this Thursday Night on Amazon Prime…

Just kidding, we get to watch Carson Wentz and the Washington Commanders play against the least explosive offense in the NFL in Chicago.

Both of these teams are bringing losing records into this contest. The Bears are 2-3 and the Commanders are 1-4, having lost their last 4. We were all forced to watch a field goal fest last week and this week’s game looks likely to be the same.

He has fumbled a couple of times and added 6 interceptions so far this season. There have been a couple of decent games, and a couple more dreadful games. Last week he played well enough to win until it was time to win. He ended the game with an interception. A story all too familiar to Eagles, Colts, and Commanders fans already.

The Bears have been a horrible offensive team this season. Justin Fields has been historically bad so far this season. He is averaging 135 yards a game and has 3 touchdowns and four interceptions this year while completing 55.7%.

They have not even thought about allowing him to try to win a game yet, as the coaching staff is keeping it very bland. For the bears to take the next step they will need to allow him to play as he did in college. Put the ball in his hands and let him be the best athlete on the field.

This could be a running game between two teams that don’t want to let their quarterbacks lose the game for them. Ion Rivera, on Monday, said that “Quarterback” is the reason that they aren’t in the same echelon as the rest of the division. If one of these teams is able to get down the field, they should be able to win this football game.