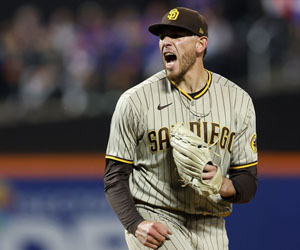 The National League Championship Series has been set, and there is not one person who had this match-up before the playoffs started.

The Philadelphia Phillies took care of business against the Atlanta Braves and the San Diego Padres stunned the baseball world with a series win against the 111-win Los Angeles Dodgers.

The Padres taking care of the Dodgers was a shocking upset. The Padres loaded up to contend with the Dodgers this year and at the deadline, but didn’t have the year that they had hoped.

They lost star Frenando Tatis Jr. to injury and steroid suspension but were led by Manny Machado all year as he took a step up in leadership and maturity. Machado has long been a uber-talented player, but this year he took the step to be a great teammate and the results have been amazing for the Padres.

The mid-year acquisitions of All-Stars Juan Soto, Josh Bell, and Josh Hader had their road bumps, but they all delivered in this series. Hader especially had a rocky time in San Diego, but he was on the bump to strike out the side to send the Padres to the NLCS.

Before this series, the Padres had lost nine straight series to the dodgers. Now they are hosting the NLCS, something that they haven’t done since 1998.

The Phillies are heading out west after a surprising upset against the Braves. The Phils are led by All-World powerhouse Bryce Harper and superstar catcher JT Realmuto. The Phillies finished 14 games behind the Braves and Mets in the Division, but they are the last one standing from the NL East. They Fired their manager in May after a dismal month, but since then they have been a very solid team.

This series is the culmination of the off-season of 2018. Both of these teams were the winners of that sweepstake that lead to Manny Macahdo going to San Diego, and Bryce Harper landing in Philadelphia. The goal of signings like that is to get to this series. Harper has been a rock star when healthy for the Phillies. He is the defending NL MVP and looks to have found his form for the postseason, having hit two homers in the NLDS.

Machado has been a stud since he has been brought up by the Minors, but has always had maturity issues. This year he grew up and put the Padres on his back. He is an NL MVP candidate, and the unquestioned leader of the Padres.

Getting to see these two lead their teams to this point is validating and exciting. We should be in for a great Series.

The Cleveland Guardians are heading to Yankee Stadium to take on the best team in the American League during the regular season the New York […]
Do you like it?0
0 Read more