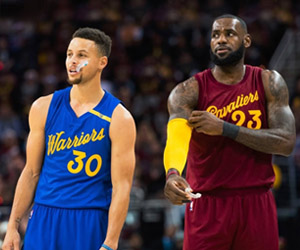 -There was little drama on the road to the NBA Finals, as basketball bettors and the best online betting sites knew the Cleveland Cavaliers and Golden State Warriors were destined to meet in the championship for the third straight year.

Now that we’ve got the matchup everyone was waiting for, let’s hope it lives up to the hype. With Game 1 of the NBA Finals tipping off Thursday, here’s some interesting ways to handicap the third installment of Cavs v. Dubs:

Sizing up the spreads
The Warriors are near -300 favorites to win the NBA Finals and avenge last year’s championship collapse. If you forgot, Golden State was up 3-1 on Cleveland and dropped three straight games – including a decisive Game 7 on its home court. The Warriors haven’t forgotten and that could be why there’s such a large price on them to win the title.

Game 1 opened with the Dubs as 7-point home favorites. The Warriors haven’t dropped a single game in the postseason, sweeping Portland, Utah and San Antonio while posting an 8-4 ATS mark. Golden State has been especially profitable heading into the finals, covering in three straight games and going 5-1 ATS in its last six playoff contests.

Cleveland is pretty much on the same pace. The Cavs rolled through Indiana and Toronto in eight games, and dropped one game to Boston before wrapping the Eastern Conference finals in five. The Cavaliers are 8-4-1 ATS this postseason, but unlike the Warriors, haven’t been a great bet heading into the finals. They’ve managed to cover the spread just once in the last three outings – a Game 5 blowout in Boston.

Cleveland was 4-3 ATS in the seven games with Golden State in last year’s finals and posted just a 2-4 ATS record while losing to the Warriors in six games the year prior. Golden State was a favorite of six and 6.5 points in the opening two games of the series last year, and easily covered in both home games.

Tall totals
The opening total for Game 1 of the NBA Finals is a record-setting 225.5 points – the tallest betting Over/Under in recorded NBA history. This number is sky high for a reason.

Those high-powered attacks are fueled by the 3-ball. Cleveland is firing an average of 33.6 3-pointers per game, connecting on 14.6 of those looks from distance for an average of 43.8 points per game. Golden State tossed 31.1 3-pointers per contest, knocking down 12.1 of those attempts for 36.3 points an outing. Needless to say, one poor shooting night could doom either one of these clubs.

Offense hasn’t been the name of the game in the previous meetings between these teams. The Cavs and Warriors posted a 2-4-1 Over/Under record in last year’s NBA Finals and went 2-3-1 O/U in the 2015 finals.

Finals MVP
With the amount of star power on the court in the 2017 NBA Finals, you could really throw a dart at the MVP odds board and come out a winner. With the Warriors priced as the series favorites, top contributors Kevin Durant (+160) and Stephen Curry (+175) sit atop the MVP board followed by Cavs forward LeBron James (+185).

-There was little drama on the road to the NBA Finals, as basketball bettors and the best online betting sites knew the Cleveland Cavaliers and Golden […]
Do you like it?0
0 Read more 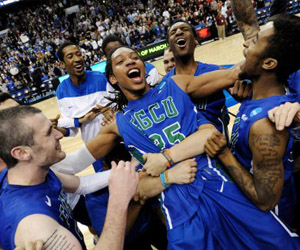 March Madness has built its reputation on those mid-major upstarts rocking the foundation of college basketball with a thrilling upset in the first four days of […]
Do you like it?0
0 Read more 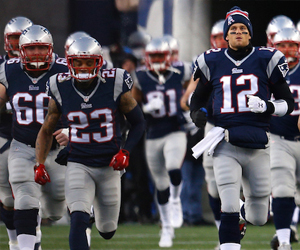 And then there were eight. The 2016-17 NFL playoffs enter the divisional round with the top seeds in each conference taking the field for the first […]
Do you like it?0
0 Read more 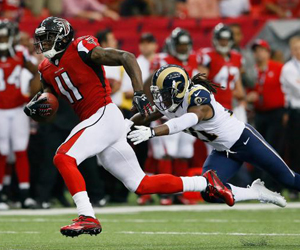